Arrival Athens, meet and greet service at the airport followed by transfer to hotel.

Morning departure for a half day tour to Corinth. It became the capital of Roman Greece in 44 BC. Paul stayed in Corinth for a year and a half (Acts 18:11) teaching and writing letters to his beloved churches. You will visit the Museum, the Market Place, the Bema and the Temples. Afternoon guide visit to Athens. Paul brought the gospel message to Athens in 53 AD. It is here that he exalted the “unknown god” on the Areopagus (Acts 17:19). Dionysus (Acts 17:34), the famous tribunal, converted to Christianity and became the first bishop and martyr of the new community. The Agora (marketplace) is nearby where Paul, like Socrates, discussed religion. You will see the Acropolis and Mars Hill.

Here you will follow the footsteps of Paul’s second missionary journey (Acts 15:39-18:22). The biblical Thessalonika is the second largest town and port of Greece. Paul visited here twice during his journey in 50 and 56 AD. His preaching in the Synagogue antagonized some of the Jews, who attacked the house in which he was staying (Acts 17:5). Your tour of the modern city includes visits to several of the earliest church buildings, Agios Dimitrios housing the finest examples of frescoes, mosaics, icons and decorative arts and Agia Sophia of early Byzantine times and beautifully decorated with mosaics (econoslast) which is known as a replica of the St. Sophia in Constantinople. The entire city, ornamented with glamorous architectural works that display all forms of Byzantine art, has been called a museum. 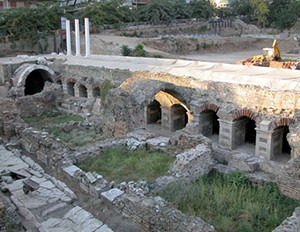 In the morning departure to Kavala. Paul landed at Greece’s most picturesque mainland port with his disciples, Timothy and Silas (Acts 16:11). You will see the Roman Aqueduct and the ruins of the Acropolis in this beautiful city, known since the 15th century as Kavala. You will then continue to Philippi where Paul preached the gospel to the Lydians, the first people in Europe to adopt Christianity (Acts 16:15). In Philippi, Paul and Silas were cast into prison (Acts 16:24).

Morning departure for Kalambaka via Veria where you will see the Bema of St. Paul. 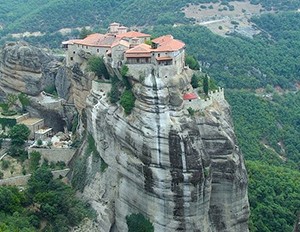 Outside Kalambaka you will see the majestic and breathtaking Cenobitic Monasteries known as the Meteora, which means “hanging in mid air”. The water running down from the Pindus mountains has carried away the limestone and left behind banks of sandstone, leaving behind the Byzantine monasteries, with their wooden galleries and comice rooftops sitting atop the summits of sheer-sided gray rock pinnacles.

Departure Kalambaka and return back to Athens - overnight.

Transfer to Athens airport for your homebound flight.